At the end of each year we traditionally compile a digest of what’s happened in Fediverse (beginning with 2019 and 2020).

So, buckle your seatbelts and lets travel back in time. Let us watch the progress of glorious Fediverse in the past year. 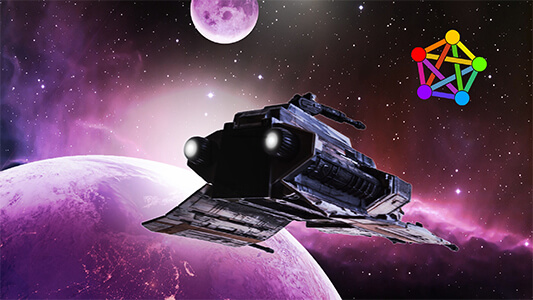 In June fediverse.party started counting Plume, Lemmy and Mobilizon in yearly statistics. They account for only 222 servers though, so the rest of the statistics spike definitely indicates that Fediverse is growing! By the way, we launched our own Fediverse crawler in November, to make sure that these numbers are as accurate as possible. 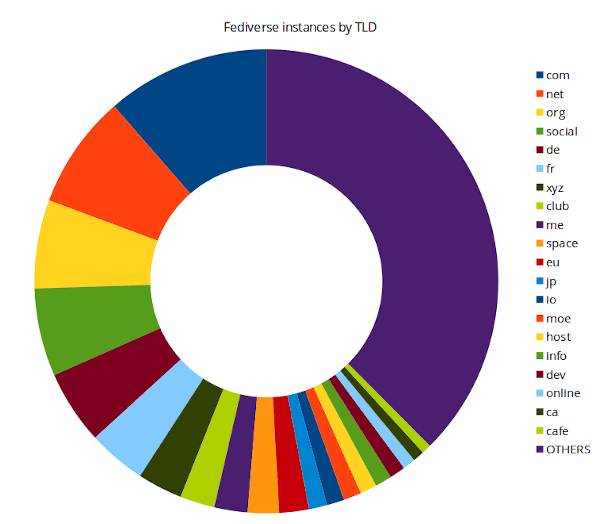 The ammount of registered accounts went back up to 2019 levels and by the end of 2021 slightly surpassed that benchmark, reaching ~4.500.000.

We, fedizens, know that numbers aren’t the most important thing in the world. But grown-ups like numbers. 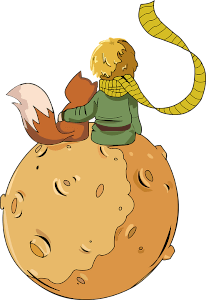 So let’s mention that, despite smaller userbase, Fediverse is showing its true potential for free open source projects: those developers who officially join our corner of the Internet enjoy higher follower numbers than on centralized social networks. \O/

Seven networks growing most rapidly in online servers in 2021 were:

🌟 Wolfgame – a game akin to Mafia; once started, it simulates a day/night cycle and allows players to vote on who might be a werewolf during the day

🌟 lectrn – social network for humans that is free, decentralized, open, and easy to use

→ For the full list of Fediverse projects in development see Miscellaneous page.

🥄 Ecko – fork of Mastodon to optimize toward community, that is making it as easy as possible to contribute

In July Inexcode relaunched fediverse.space - a beautiful project that has previously been developed by Tao Bojlén and that got a second life thanks to its codebase being open source! In August Paula launched a new forum for any discussions related to Fediverse - fediverse.town. In November Minoru open sourced Fediverse nodes list to help public statistics hubs and to empower new ecosystem developments! And by the end of the year, Fediverse Wiki project was launched. 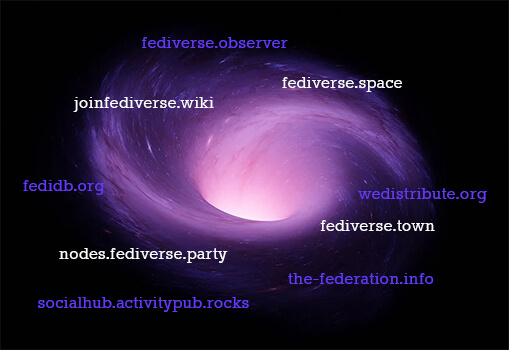 Let’s make even more useful, quality projects around Fedi! And, please, may they not rely on avoidable 3rd-party dependencies, like Google Fonts, Cloudflare and other centralized trackers.

More and more official institutions are moving towards FOSS and Fediverse:

• In 2021 Noyb.eu officially established its presence (for the second time:);

• Universities are joining federated networks too.

There have also been ideas to set up an official Fediverse foundation, a legal entity to provide extra opportunities for contributors who want to work on improving Fediverse. Arnold Schrijver has been working on fedi.foundation. Would you like to be part of this initiative? Join the discussion!

✔ January 7: PeerTube version 3 is out, complete with live streaming feature and a behind-the-scenes 💡 short film

✔ January 17: Lemmur, a mobile client for Lemmy, has its first release

✔ March 10: a wave of new users migrates into the Russian constellation of Fediverse

✔ April 18: diaspora* releases a new minor version. Jonne Haß , one of the core team members, continues work on a new native app for Android and iOS – you can already help with translations and beta test it (the app will work for pods running the develop branch v0.7.99.0 where the API is available)

✔ May: Fediverse holds its very own Fedivision song contest

✔ May 17: Tusky, a popular Fediverse mobile app, is temporarily removed from Google Play Store, because Google doesn’t understand decentralization. Users who’d downloaded it on FDroid weren’t affected. Google had already threatened to remove Fediverse apps in 2020, so this is becoming a nice yearly tradition.

✔ May 26: Smithereen, a project offering the look and features similar to Vkontakte, makes its first beta release

✔ June: Owncast is awarded a grant by the NLnet Foundation to support work around federation and ActivityPub

✔ July 5: WriteFreely, a blogging Fediverse platform, shares an up-to-date roadmap for the next 6 months

✔ July 18: GNU Social maintainers release a long-awaited version 2.0 with ActivityPub support, and later publish some updates and plans for version 3

✔ August 4: Bookwyrm, a social reading and reviewing platform, gets an official website

✔ August 8: Pleroma 2.4.0 is released, featuring many fixes, additions and improvements

✔ August 13: Mastodon is registered as a non-profit organization

✔ November: Mastodon fork Truth.Social, associated with the former president of the United States, Donald J. Trump, is open sourced after pressure from the maintainers of Mastodon

✔ November 22: FedeProxy, a project that will allow code forges to interoperate, gets rebranded to ForgeFriends. Earlier in the year developers behind the project got a grant from NGI DAPSI

✔ November 23: Mobilizon releases version 2 with many tweaks and improvements

✔ December 6: Bonfire team who are working on customizable ActivityPub software share their new beautiful website communicating the vision and the motivations behind the project

✔ December 26: Bonfire is awarded a grant from the Culture of Solidarity Fund to support cross-border cultural initiatives of solidarity in times of uncertainty and “infodemic”

Is any important 2021 event missing? Feel free to suggest it in issues or send a suggestion in a direct message.

Feneas, the organization hosting this website and its repository, may soon shut down. This is sad news. Huge thanks to all the Feneas team, and personally to Jason Robinson and Lukas Matt, for your work, for always being patient and helpful. Good luck in all your future endeavours!

Fediverse.party is in search of a new home. It would be nice to move to another GitLab instance. But, as stability and reliability are more important than certain software, we’ll most likely migrate to Codeberg. Let’s wait and see how it works out.

Move slow and build things to last! Here’s to another great year. 🎉