Happy Birthday to us! 🎉

Time flies, and here we are, partying in Fediverse for almost 3 years! “Almost”, because, strictly speaking, the website went online somewhere in mid-winter. It took a couple of months to brainstorm design concepts and make them reality. But November 25th was the day this domain was registered, which is as good as any day for looking back at the journey and for eating cakes! 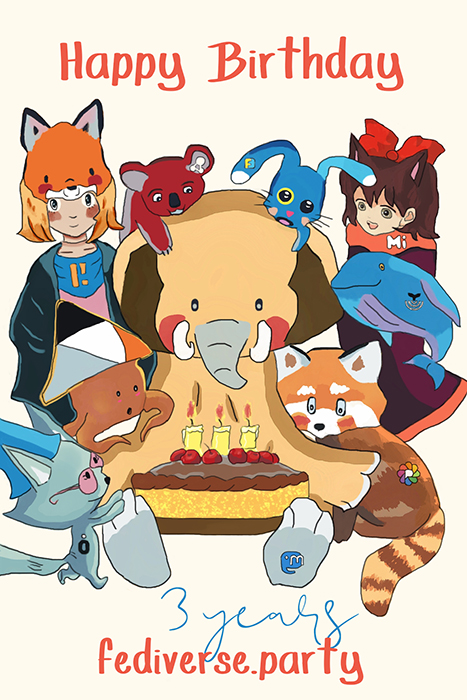 This is a static website generated with Hexo, which allows lazy, stress-free maintenance, though, potentially, slightly limits functionality. Big thanks to Feneas administrator team, who make sure the website and its repository stay intact.

✔ fediverse.party should work for users who prefer to block scripts in the browser. This was done mostly for fun (CSS is fun). Has this actually been useful to anyone? Let us know, if it has.

Some things, like power and personal data, are best left decentralized. Other things, like knowledge and public data, benefit from centralization, for convenience. There were no certain plans for the website, except one: make finding Fediverse related things a bit easier. So if you’ve bookmarked this website and returned to it later in search of GNU Social’s new repository or a link to Mastodon’s Trunk that you’ve seen days ago but have forgotten since - then everything works as it should. One bookmark instead of many!

Since our main goal is to gather information about Fediverse projects, we link to many external resources. Today it’s more than 700 external links.

So far our repository has witnessed 518 commits.

Maintenance work is hidden from visitor’s eyes and is mostly about keeping all the links up-to-date, removing broken and adding new ones, updating information.

Most importantly, fediverse.party has had 11 merge requests by 10 amazing humans!

One of our contributors suggested using HTMLproofer for regularly checking all links, which became a huge time-saver. Many thanks to that clever person.

Most Fediverse projects have a community of their own with communications in dedicated chats and forums. Some projects don’t have any official account which would share latest project’s news. Following the progress of such projects becomes a tricky task. This is where your contributions and merge requests were a significant help. Thank you!

The website’s design hasn’t changed much since its launch. Among the newly created pages, perhaps the most useful are two pages listing all known ActivityPub software projects and developer tools.

Did you know we also have a Wiki? It’s a draft for information that later finds its way onto website’s pages. Being a draft, it gives more freedom to maintainers to list any projects, even those that only intend to support federating protocols in the future (while the website lists only projects that have already started initial work).

This Wiki would have been impossible without several maintainers: Danyl Strype, Liaizon Wakest, Eric Buijs and Arnold Schrijver have all contributed to fediverse.party Wiki pages - thank you very much! 👍 Specifically, Danyl Strype and Arnold Schrijver are to be thanked for finding and catalogueing all the newly appearing Fediverse projects. Their valuable work should be mentioned in books about Fediverse research history! In any case, it’s definitely part of this website’s history.

Plans for the future?

The creator of this website has always wished to make it attractive for Fediverse newcomers. Once upon a time, someone submitted fediverse.party to HackerNews. After deciphering angry user comments, we got some really good feedback on what user experience issues the website had! Since then, there were no attempts to find any feedback from common users.

A week ago, preparing for our symbolic 3 year milestone, we had a mini “crash test”, where several completely non-nerdy users were asked to look at every page, click here and there, read and say what they think about it.

The experience was an eye-opener. It can’t be called a complete fiasco: design and pictures received some kind comments. But the conclusion is simple: in its current state, fediverse.party is not helpful to any common grandma, not helpful at all. A new, nontech-friendly version of the website would require much less text (of a completely different nature), much more images and – crucially important – absolutely different terminology.

Which is to say, we won’t try to be a website for everyone. If we can be of any value to tech-savvy people who are already part of Fediverse, our mission is accomplished.

As for another, better version of this site – will it appear? Depends on luck. But nothing is impossible!

And there’s an old bot account that informs whenever popular Fediverse projects release a new version. It’s buggy. You don’t want to contact it. :)