One more year in Fediverse passed. Let’s have a look at what we have achieved in 2020.

The number of registered users, on the other hand, has decreased and by the end of the year remains slightly above 4.000.000. This may be due to the fact that several large servers went down during the year, and because some administrators periodically remove long inactive accounts to free up space for newcomers.

Whatever the reason, we may rejoice that more small instances keep appearing. That’s what Fediverse is supposed to be doing – decentralizing!

Seven networks growing most rapidly in online server numbers in 2020 were: 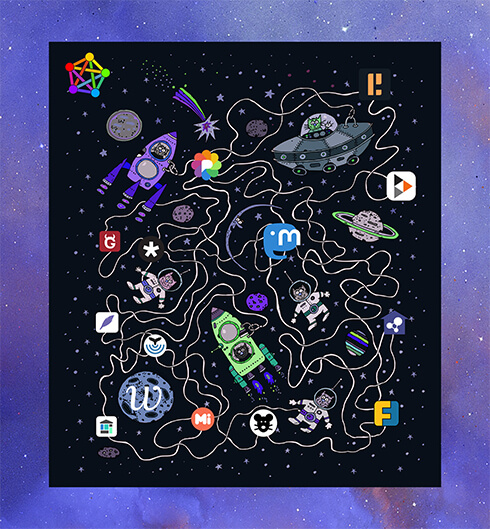 Credits: picture is based on an image from Pixabay.com

🌟 Bonfire – a plug & play federated social network based on CommonsPub

🌟 Bookwyrm – social reading and reviewing, a federated alternative to GoodReads

🌟 SkoHub – a publication / subscription infrastructure for Open Educational Resources; allows to follow specific subjects and be notified when new content is published

🌟 XWiki Extension – an implementation of the ActivityPub for XWiki

✔ January 23: ForgeFed gets funded by NGI Zero Discovery Fund established by NLnet with financial support from the European Comission’s Next Generation Internet program

✔ April: The French ministry deploys about 35 PeerTube instances, creating a vast platform of educational videos without tracking and advertisements

✔ May: Mastodon’s creator announces that some progress has been made on adding end-to-end encryption for direct messages in Mastodon. By the end of 2020, this is a work in progress

✔ May 16: PixelDroid, an Android client for Pixelfed, prepares for an alpha release

✔ August: Google threatens to remove several popular Fediverse apps from Google Play on the pretext that servers in Fediverse engage in hate speech and users can be exposed to it via these apps. Fedilab, a popular multi-purpose Fediverse app, receives Google warning too. This brings a wave of rage from users who blame Google for double standards and demand to also ban Twitter apps and Chrome, as all of them expose users to hate speech. Heated discussions on HackerNews, Reddit and other tech outlets follow

✔ October 2-5th: A conference about the present and future of ActivityPub takes place in Barcelona. 💡 Watch the talks

✔ October 27: Mobilizon stable version 1.0 and a guided tour of the project are released

✔ November: Streaming is coming to PeerTube, a feature awaited by many

✔ December: An ActivityPub conference happens during rC3, 💡 watch the talk about Funkwhale.

Is any important 2020 event missing? Feel free to suggest it in issues or send a suggestion in a direct message.